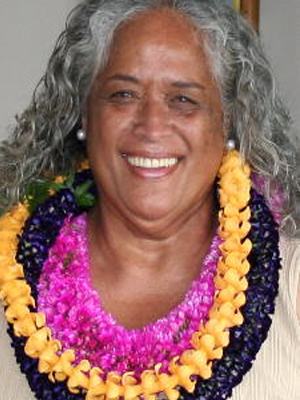 Like her ancestors, Pualani Kanaka’ole Kanahele epitomizes cultural brilliance, beauty and power. A renowned scholar and author who is steeped in the hula tradition, she currently leads a team of researchers in reestablishing an ancient Hawaiian system of cultural intelligence. Her vast reservoir of knowledge ranges from ethno astronomy to volcanism.

Pua is of pure Hawaiian descent and is responsible to her ancestral lineage. She was raised in a Hula tradition that spans many generations. Pua is also responsible to this matrilineal tradition. She knows the forest, mountains, volcanism and the ocean of her homeland from her Native Hawaiian perspective. These too are her responsibility.

She was educated in Western institutions and earned a Bachelor of Arts Degree. At the age of 69 in the winter of 2006 Pua received a Doctor of philosophy Degree from the University of Hawaiÿi at Manoa. She understands this formal Western Education system and is responsible to its philosophy, concepts and the points of view noted in the process of direct learning.

Pua is the President of Edith Kanakaÿole Foundation, a small family foundation that focuses on promoting and elevating cultural knowledge and intelligence. She is a Kumu Hula for Hälau o Kekuhi, also a family Hawaiian traditional dance school. Pua is Director of Hawaiian Traditional Knowledge Research with Hawaiÿi Community College.

At age 69 Dr. Kanahele received an Honorary Doctor of Philosophy degree from the University of Hawai’i-Mänoa. Devoted to ancestors and descendants alike, Pualani is President of the Edith Kanaka’ole Foundation, a family foundation that promotes and elevates Hawaiian knowledge and intelligence. She is also a Hula Master and Director of Hawaiian Traditional Knowledge Research with Hawaii Community College.