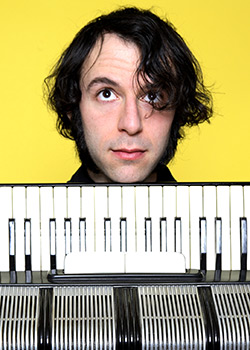 The “mad scientist of music,” artist, producer, composer and performer.

Like his mythological namesake, Daedelus is an inventor and a creator of sonic labyrinths, recombining sounds from an eclectic palette into an innovative genre all his own.

Daedelus has performed more than a thousand shows for audiences on five continents—from Iceland to Istanbul—and is a founding father of the L.A. “Beat Scene,” often playing the storied “Low End Theory” club nights.

Each live show is unique, employing Monome controllers and open-source software, which allows for on-the-fly improvisation. The backdrop onstage is Daedelus’ “Archimedes,” a robotic array of moving mirrors that reacts to and reflects the performance.

Most recently, Daedelus composed the soundtrack for the award-winning video game Nidhogg and was commissioned by UNESCO World Heritage to create a sound portrait of emerging culture.