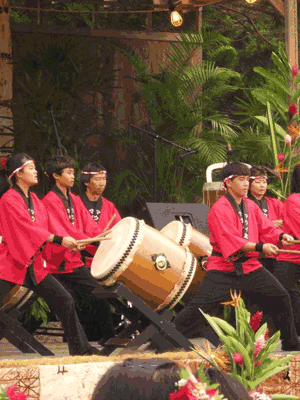 Japanese immigrants from Fukushima prefecture brought this song to Maui in the early 1900’s. Many of the immigrants lived in the plantation village of Keahua and organized an informal group to play Fukushima Ondo for the annual O-Bon festival. In the “good old days”, the group played the song for hours and people danced from sunset to early morning. Friends, relatives, and visitors of all ages, nationalities, and religions came to attend this annual festival.

On Maui, as the plantation villages were being closed, these O-Bon festivals moved to various Buddhist temples. These festivals are cultural gatherings that are similar to the ones held during the days of plantation village life. Today, the festivals continue to be celebrated by many generations of families of various ages, nationalities, and religions. The music tradition at these O-Bon festivals has however changed. Most of the songs are pre-recorded; however, Fukushima Ondo is still performed live.

The informal taiko group that existed in Keahua has continued for nearly a century through five generations of the Watanabe family. The family founded Maui Taiko with the intent of perpetuating the Fukushima Ondo tradition and incorporating other forms of taiko music. Albert Watanabe, age 83, one of the group’s founders is from the third generation of Watanabe family members involved with this tradition. His daughters and grandson continue the tradition for future generations.

The current group includes 50 members ranging in age from 8 to 60. Members are encouraged to join the group with other family members. The group is also multi-ethnic and diverse in religious beliefs.
When the group was first formed, its priority was to have an inventory of drums to play on. With genuine taiko from Japan costing $3,000 – $5,000 apiece, the group had to look to other sources for their instruments. There was no one on Maui who knew how to build a taiko or skin it (tacking the cow hide to the barrel). Group members learned the craft of preparing the body of the drum out of used wine barrels from groups in California. In addition, they learned how to skin these barrels from various other individuals, improving on the methods along the way. Maui Taiko has made 18 drums that are used in its current performances along with stands, practice drums, and sticks. Maui Taiko has also assisted numerous temples on Maui to re-skin their decades-old authentic taiko. The group members’ involvement in the construction of these drums, further their appreciation for the instruments.

Maui Taiko’s performance schedule includes bon dances at 12 different temples and three bon dances at elderly care facilities during the summer. Throughout the year, the group also performs at numerous cultural and community events as well as corporate functions and celebrations. Maui Taiko has co-sponsored the annual Maui Matsuri Japanese Festival since the festival’s inception in 1999. The event now attracts about 9,000 people. In 1999, the group performed as the pre-concert entertainment for a sold-out concert at the Maui Arts and Cultural Center featuring the popular jazz group, Hiroshima, and their guest, Kinnara Taiko. Maui Taiko has performed with San Jose Taiko in their Maui debut in 2000 and has also appeared on the Discovery Channel’s “Discovery Kids” segment that featured activities on the island of Maui.

Maui Taiko’s 2001 Aloha Tour to Japan, sponsored in part by the Hawaii Tourism Authority, showcased the group at performances in southern and northern Japan. The Nichibei Taiko Festival in Fukuyama City featured five taiko groups in a three-hour long concert. Traveling to northern Japan, a performance with Uneme Taiko at The Beautiful Fukushima Future Expo in Sukagawa culminated the 11-day tour. In late 2001, Maui Taiko was instrumental in producing a joint concert with the Chikuzan Takahashi Shamisen Group from Niigata, Japan. In 2002, the group sponsored the Maui International Drums for Peace Concert which showcased numerous ethnic drumming ensembles. In 2003, select members of Maui Taiko taught workshops at the North American Taiko Conference in Los Angeles and in 2005 performed for the prestigious Taiko Ten Concert for this conference in Sacramento. The group performed as the pre-concert act for The Who in 2004 at the Maui Arts and Cultural Center and for Bon Jovi in 2007 at a corporate function. In 2008, Maui Taiko embarked on another tour of Japan and performed again in Fukuyama City. The group shared the tradition of Fukushima Ondo as well as filmed portions of a made-for-television documentary which shares the Japanese-American story in Hawaii. The documentary, “Great Grandfather’s Drum,” is scheduled to be completed soon.

Maui Taiko’s goal is to perpetuate Fukushima Ondo and to continue to elevate their artistry in taiko and share it with the community.