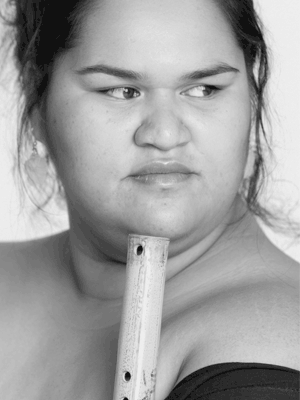 Paula Fuga is a musician on a mission. Though many play music for the platitudes or acclaim, Paula plays music for a culture, spreading the thoughtful and evocative voice of the Hawaiian people across the world. Not content to be merely a widely respected artist, Paula has taken on the mantle of cultural ambassador—using her talent as an instrument to help bring about positive social change within her islands and beyond: performing at benefit concerts for charter schools, instilling the Hawaiian culture in the generations to come and, generally, being a beacon of the meditative and healing powers of her people.

Paula’s debut album “Lilikoi” was met with true astonishment by many in the music business. Who is this Paula Fuga?, they wondered. Producing and releasing her own album, a collection of songs that run deep with intensity and emotion—yet widely appealing and accessible—Paula set a new benchmark in independent music production, an album with masterful production and genuine cultural connection that have caused people to sit up and take notice. An amazingly singular voice, both soaring yet nurturing, carefully wrapped with the instruments and sounds of her homeland, standing tall on the the pride of her people…it is time to find out—this is Paula.