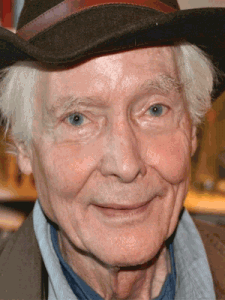 “I feel lucky to be alive at a time when W.S. Merwin is creating his startling and incomparable work.”—Edward Hirsch

Born September 30, 1927, in New York City, William Stanley Merwin was the son of a Presbyterian minister, for whom he began writing hymns at the age of five. He was raised in New York, Pennsylvania and New Jersey and attended Princeton University on a scholarship. As a young man, Merwin went to Europe and developed a love of languages that led to work as a literary translator. Over the years, his poetic voice has moved from the more formal to a more distinctly American voice. As the Atlantic Monthly says, “The intentions of Merwin’s poetry are as broad as the biosphere yet as intimate as a whisper. He conveys in the sweet simplicity of grounded language a sense of the self where it belongs, floating between heaven, earth, and the underground.”

He has lived in Majorca, London, France and Mexico and several places in the United States, as well as Boston and New York. In 1976, Merwin moved to Hawaii to study with Robert Aitken, a Zen Buddhist teacher. He married Paula Dunaway, in 1983, and settled on Maui. For nearly 30 years, they have lived in a home that he designed and helped build, surrounded by acres of land once devastated and depleted from years of erosion, logging and toxic agricultural practices. Merwin has painstakingly restored the land into one of the most comprehensive palm forests in the world. He continues to live, write and garden in Hawaii.